Ubuntu 11.04 comes default with Unity, a slick new user interface that helps for users with limited space, i.e. Netbooks. However, I have dual 23 inch monitors, I have more than enough space for menus and options, and when things are shrunk to please the un-power-users, it really pisses off the power-users. So, instead of griping and disabling Unity altogether, and going back to pure Gnome, I'll stick it out with Unity, lest I be ridiculed for being resistant to change. Plus, lots of man-hours went in to Unity, so I'll give it an honest attempt.

First Major Gripe: Unity auto-hides, and thus my taskbar is gone.
I do FAR MORE on my computer than just surf the web. I'm a programmer, so I have my editor windows open (atleast two), I have several terminal windows open. I also have several images open, I'm constantly taking screenshots. And I always have gedit open, for just pasting some text for a period of time. So, without a taskbar, I'm significantly hamstrung. And having to mouse over the Ubuntu icon, or mouse over it, and then jiggle it until the Unity bar full of installed applications pops up, is very very sucky.

FEATURE REQUEST: Allow me to right click somewhere in the Unity bar launcher and have an option for Preferences that takes me to the setting manager, and have the setting-manager installed by default. 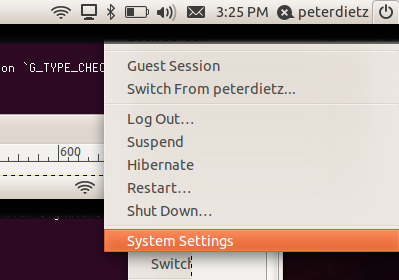 2b) Find compiz config (so we can then find unity config)
From the System Settings, search for compiz, and click the first result.